I woke up Wednesday, August 26th in a shady, cold valley with Mt. Kenya directly overhead. Mount Kenya is the highest mountain in Kenya and the second highest in Africa, after Kilimanjaro. The highest peaks of the mountain are Batian  at 5,199 metres (17,057 feet), Nelion at 5,188 metres (17,021 feet) and Point Lenana 4,985 metres (16,355 feet). Point Lelana is seen on the left here with the reddish tone. John, James, David and I had just trekked up to Point Lenana the previous day. I was certainly a bit rough around the edges and for the first time my legs were quite sore. I had pushed them like I had never pushed them before. Sore, yes they were, but they were not injured and I was ready to make the 14 kilometer (8.7 miles) hike down to Old Moses Camp.

Before leaving David and I had breakfast in the Shipton’s Camp dining hall. Then we prepared our packs for the walk down the mountain.

There were other groups at Shipton’s Camp. We met a couple from Switzerland who were going to wake up at 3am and hike up the mountain in the dark with headlamps in order to arrive at Point Lenana in time for sunrise. I admire their courage but that is an adventure I am glad to postpone indefinitely. It was difficult enough in daylight with excellent weather. There was another couple of guys from Ireland who were going to climb Batian, the highest peak. The had technical gear and ropes. The last time I saw them was about 8:30 in the morning when they were having breakfast. They seemed a bit disappointed because their guide had not yet arrived and the weather was perfect. As you can see from the photograph, there wasn’t a cloud in the sky around 7 in the morning. By 8:30, the clouds were starting to move in.

After breakfast, David and I donned our packs and started down the mountain with John and James. As we were walking, John stopped and was making a smacking noise with his mouth as he looked to the left. I turned to see this hydrax staring right into his eyes wagging his tail. This rock hydrax just might be the cutest animal I have seen all year. They are called dassies or rock rabbits in South Africa. 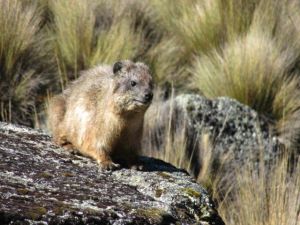 We were now in a broad valley descending steadily toward Old Moses Camp.

At one point I passed David, and then looked back to see the Mt. Kenyan peaks behind us.

The sun was warm but the air was crisp and cool. We passed many areas where clear water seeped from the ground making the trail wet. In certain areas, in the shade mostly, I could see ice crystals in the earth. 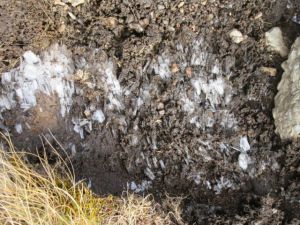 One aspect of the trek that is important to mention is the pristine quality of the mountain. James always carried a bag and a trash pick up tool. He left any paper, which would biodegrade quickly, but picked up plastic bottle caps, bags, and wrappers that had been discarded by careless hikers.

There was one particular bird we saw frequently that often made me laugh. It was a small puff ball of a bird with long legs. I was surprised it could fly.

As we continued down the mountain the air became warmer with more moisture. In the morning we had been above the valley clouds, now we were moving into them. Many areas we walked through looked like we could have been in the Scottish Highlands (although I have never been to the Scottish Highlands, this is how I imagine them). 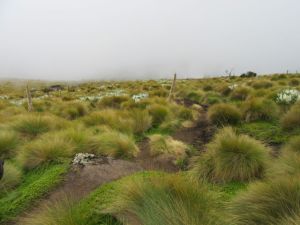 James stopped and pointed to the ground with his trash pick up tool. “Elephant. This morning,” he said. Perhaps this is a good opportunity to mention an interesting phenomenon concerning the language. Kenyan English is heavily influenced by British English and Swahili. Coming from the British side, Kenyan’s do not pronounce the “R.” Girl would be pronounced “gul,” hurry is distinctly two syllables “Huh-ree.” While staying at Kongoni Camp I looked up at the menu on the chalkboard and it read, “Calmalized Onions.” The person who wrote the menu simple spelled the word as he or she would say it. Swahili on the other hand is spoken with staccato bursts. I was listening to the television on in the other room, perhaps a news program, and it sounded a lot like Spanish from Mexico. American English in comparison sounds sluggish and slow, much like a Southern drawl sounds to someone from New York or California.

I noticed when I spoke normally to Kenyan’s they just didn’t understand what I was saying. My normal way of speaking has even started to sound odd to me when I listen to myself from the Kenyan perspective. That is what I have found myself speaking in staccato bursts without the R, and using few words. I have heard David doing the same thing when speaking to James or John. It simply makes communication easier. If my friends or family from Tucson were to be able to pop in on a conversation they might think I was crazy. All I can say is that it makes sense here. So I repeated to James, “Yes, James. Elephant. This mo-ning.” 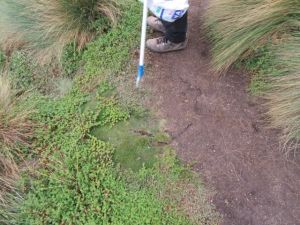 I kept a look out for an elephant but we never saw one. They move quickly and the area we were covering was vast.

Off in the distance we could see Old Moses Camp at 3,400 meters elevation (11,155 ft), and by 12:30 or so we had arrived. We had lunch and settled in for a relaxing afternoon. I walked around a bit then napped in the afternoon, giving my body a chance to recover.

I saw several flocks of this bird, moving mostly on the ground looking for insects and vegetation, and I believe it’s a Jackson’s Francolin (Pternistis jacksoni).

There was a small store at the Old Moses Camp and David bought us a couple of Tusker’s. There is a tradition called the Sundowner, from the British Colonial days, which is to have a cocktail or beer as the sun goes down, preferably in a spot where there is wildlife. David mentioned that many safari camps have balconies off of the rooms near a waterhole, where guests enjoy their cocktail at sunset. Many of these camps have been established for decades and are scattered about mostly to the south, west, and east of Nairobi. There are so many, I could not name them all, but some of the more well known are Tsavo, Hell’s Gate, Massai Mara, Amboseli, Ruma, Nderi, and of course the Serengeti, which is in Kenya but mostly to the south in Tanzania.

As the sun descended in the western Kenya sky, I could feel that our adventure was coming to a close. The air was warmer now, easier to breath, with the moist herbal smell of juniper and witch hazel. I had made a friend in David. He had done the trek, in part in remembrance of a close friend who had recently passed away. I had done the trek as an introduction to a new chapter in my life in Kenya, perhaps for a year, maybe longer. Tomorrow we would wake and walk down the road a couple hours to the Sirimon Gate, at the edge of the park.