Once again, I laid in my sleeping bag slightly cold waiting for the first hint of sunlight. As I exited my tent, this is what I saw. 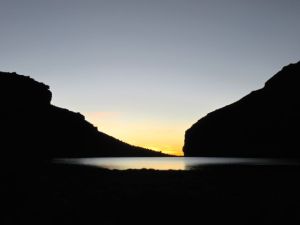 I walked around in the cold golden glow of this magical mountain. Even the birds were chilled and didn’t seem quite ready to move yet. 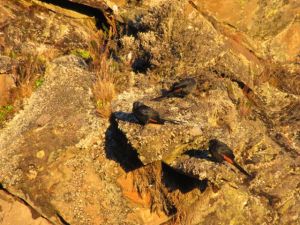 This hyrax seemed a bit out of sorts. 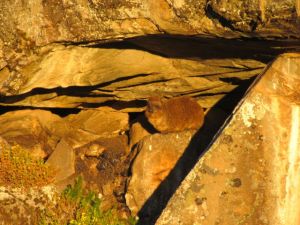 At breakfast I was talking with one of the porters and he said that Day 4 was going to be easy. He said it was going to be a two hour hike up to a junction, then 20 minutes to Point Lenana. Point Lenana is the third highest peak of Mt. Kenya at 4900 meters (16,076 feet). Then he said we’d coast down to Shipton’s Camp and be there by noon, no need to pack a lunch. I don’t know if he was joking, lying, or seriously mistaken. Maybe he was talking about his day, because the porters did not ascend to the peak. They hiked up to a lower junction then headed down to Shipton’s Camp and were there by noon. We had a much bigger day planned but did not know it. 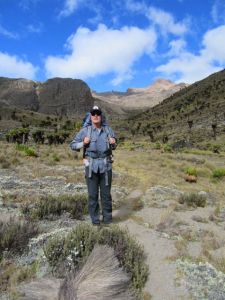 We left Lake Michaelson at around 8 in the morning. First, we had to ascend back up to the trail we had left the day before at 4200 meters (13,780 feet). The picture above was taken after we had done that, and there was a broad valley with a gentle slope, punctuated by very steep sections. The air was getting seriously thin at this point.

Very high altitude is defined as 3,500–5,500 metres (11,500–18,000 ft) and we were right in that range. The lack of oxygen is sensed by the carotid bodies, which causes an increase in the breathing rate, in other words, hyperventilation. In the attempt to gain more oxygen the body breaths faster, and exercise exacerbates this effect. The heart is likely to beat faster and many people develop nausea, unusual tiredness, headache, lack of appetite, or have difficulty sleeping. I definitely had minor bouts of headache and took ibuprofen to alleviate the symptoms. I sometimes felt lightheaded and even experienced some ataxia, difficulty in walking a straight line. When that happened I usually just had to concentrate to keep my pace and stay on the trail. I made sure to drink a lot of water to help the body rid itself of toxins.

But even though my body was constantly struggling to adapt to the conditions, I was also in awe at the stunning beauty around me. I was passing through a truly incredible environment that relatively few people ever see. David and I asked John if local people ascended the mountain or at times lived on Mt. Kenya. John replied that Mt. Kenya was considered the Mountain of the Gods and was off limits. 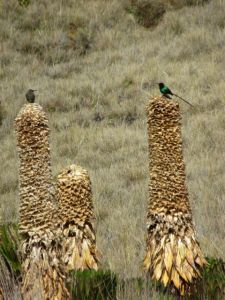 We kept pushing up steep grades, one after another. To say it was physically demanding is an understatement. John and James made sure we were making progress and kept the right amount of pressure up. Finally we reached a junction about 150 meters below the summit and were able to drop our packs. I was surprised, however, and not pleasantly so, that at that point it didn’t seem to make much difference. Walking without my pack was seriously difficult. After six or eight steps I was winded. If I tried to go too fast I simply had to stop to catch my breath. 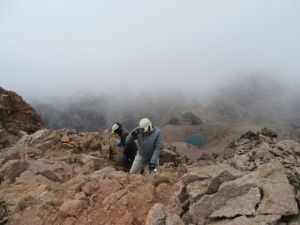 The last 50 meters or so involved what I would call scrambling over and around large rocks. Above you can see David and James making their way up about 10 meters below me. If you look over David’s left shoulder you can see a lake far below. That’s how steep it was. In addition, it was cold. All this, and we had excellent weather the whole trip. It took about an hour to do the 150 meters up the final push, but we did it. I could look down on the other side of the mountain at a glacier and lakes below. 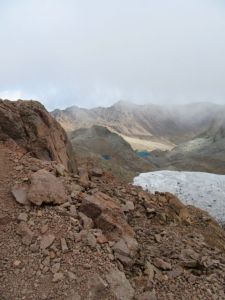 One added perk was that Point Lenana has the highest via ferrata in the world. A via ferrata is a series of guiding cables and permanent steel ladders to assist the hiker to the peak. Mt. Kenya has two higher peaks that require technical climbing skills, ropes, and gear. I am more of a hiker than a climber, so the via ferrata was a welcomed feature. 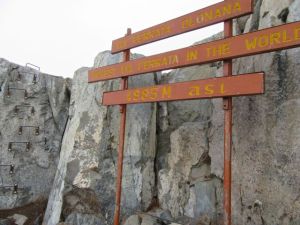 But you know, we did it. David and I climbed a very high peak that was quite challenging with the help of John and James. 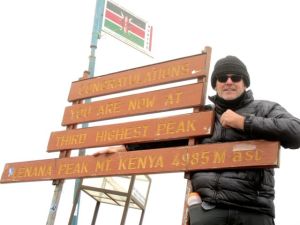 I could hardly believe we were there and my head was spinning a bit, but we did get pictures to prove it. My smile was genuine. I was very happy to be at the top. 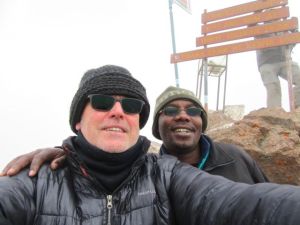 We couldn’t have done it without John and James, there is no doubt of that. 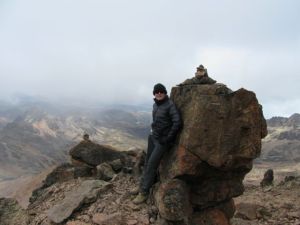 But the challenge was not over. I remember John saying that the climb was more difficult but the descent was more dangerous. We had to watch our step on the way down because one slip could lead to a serious fall. Fortunately, we took our time, watched our step, and made it back to the packs.

For me, however, one of the most difficult parts was still to come. From where we were on the mountain, and I did not know this at the time, the most direct way down (without a lot of backtracking) was straight down the mountain. It was very very steep, and many areas had loose rocks. Point Lenana to Shipton Camp is a 700 meter elevation drop and we did it in an hour straight down a ridge. John showed me a technique that I called the Charlie Chaplin walk. It involves shuffling with your heels together, toes apart, taking tiny steps. If I began to slip the other heel was right there to keep me from falling. It worked beautifully for John, and for me too in the not-so-steep sections. But at my weight of about 200 pounds, in the many very steep sections, the only option was to put my feet in the same direction and hop from one anchor point to another, hoping the embedded rock or tiny not-as-steep section would halt my descent.

My thighs were burning and for the first time in the trip I could feel blisters forming on my feet. At one point, about three-quarters the way down, I looked over at James who was sitting down with his pack on watching me struggle. I said, “Why did you take us this way?” He replied simply, “Mlima.” Translated that means “Mountain.” I understood immediately and relaxed. A few minutes later when I was getting seriously tired, John looked over at me and said, “Concentrate, you are almost down.” The picture below was taken as we approached Shipton’s Camp after the difficult descent and the trail returned to normal. 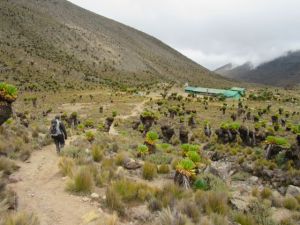 As we arrived to Shipton’s Camp I took the photograph below which might give you an idea of the steepness of the terrain and the 700 meters we did an controlled fall down the mountain. 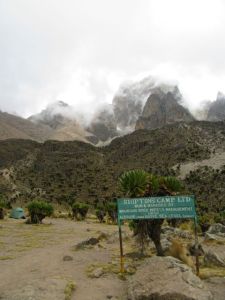 Once again, the pristine beauty of the mountain snapped me out of my funk. The photograph below is the headwaters of the Nanyuki River. The water simply flows right out of the mountain from the glacier above. 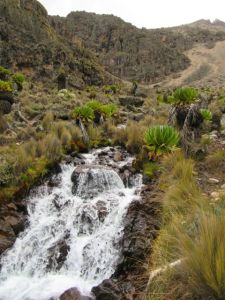