I woke up on Saturday morning happy that it was the weekend. I had one major goal for the day. I wanted to get the door open to my patio. The door had been locked by the tenant before me and the key was lost.

Dr. Okenwa-Vincent had told me many times throughout the week that he wanted me to move to another apartment, one on the fourth floor with a refrigerator, microwave, and television. I said I was happy where I was, but sure I would move. My apartment had none of those amenities. On Thursday I headed over to the housing office of the Masinde Muliro University of Science and Technology. There was team of four people and we packed into a small truck and drove ten minutes to my place. We headed up to my place and the team walked in. “Nice,” one gentleman said, “This is a good apartment.” “I agree, I have been happy here,” I said. They looked around. “Looks good,” another person said.

“The only thing is the door to my patio is locked and there is no key,” I said. “Maybe we can talk with maintenance and they can open if for you. Or maybe we can find the key,” the lead person said, wearing a suit and tie. “Okay, that would be great,” I replied. The team of people filed out of the apartment.

“Um, I thought I was being moved to the apartment on the next floor, and that was why we were here,” I said. “We cannot find the keys to that apartment, and it is not ready yet,” one man said. That had been the problem all along, I thought, and it had been a week. I was supposed to move in to the fourth floor apartment from the very start, but had been offered the third floor apartment because it was clean and there were keys. “How about if we move the refrigerator from the upstairs apartment to your apartment?” one of the team asked. “I like that idea,” I said. “We will look into it,” another said.

On Friday, I saw that someone had moved into the upstairs apartment. It’s one thing to move a refrigerator from an empty apartment. That is possible. It’s entirely another matter to move a refrigerator from a now occupied apartment. The new occupant would be, let’s just say, not happy. It was clear that I would not be moving. It was also clear that if I wanted anything done I would have to do it myself, and that was my Saturday goal.

I took a piki-piki, or motorcyle taxi, into town for 50 shillings. I went to a hardware store and explained my predicament to the man behind the security screen. “That is not a problem,” he said, “I will sell you a key blank for 100 shillings ($1). You take to the locksmith and he will cut the key.” “But how will he know how to cut the key?” I asked. “He will take his tools to your place,” he replied. “Okay, where can I find the locksmith?” I said. “See that white Nissan?” he said as the pointed down the street. “Turn there,” he said, indicating a left turn with his hand. “Go past the lady selling the bras, and down the alley. There you will find the locksmith.” “Asante,” I said and headed down the street.

I followed his directions, found the lady selling the bras, and walked down the alley. I could see no locksmith. I was looking for a grinding wheel and a board of key blanks, similar to what I had seen at the Ace Hardware store near where I live. I heard a lady say, “Hey, mzungu!” I ignored the comment, but walked up to her and said, “I am looking for the locksmith. Is he around here?” “No, he died,” she said. “Is there another locksmith in town?” I asked. “Yes, near the DeNeru building,” she said. “Where can I find that?” I said. “Down the street then this way, then down, that way,” she said as her hand made a left motion then moved straight into the air. “I think I’ve got it,” I said, and walked off in the direction she had indicated.

I made a left, then a right, and walked straight a couple blocks. “Is this the DeNuru Building?” I asked a gentleman on the street. “One more block. On the corner,” he said indicating with his hand. I walked the block, and found another hardware store. “Is this the DeNuru Building?, I asked. “Yes, it is,” a lady replied. “Do you make keys?” I asked. “No, but the locksmith is across the street. Can you show him, Asan?” she said. Asan walked me across the street. A truck had stalled in the street, creating a lot of commotion. Asan made it across just fine but I was dodging pedestrians, bicycles, and motorcycles. Asan looked concerned, but finally I made it across too. “This is the locksmith,” he said. “Asante,” I said.

We walked to a piki-piki driver. “How much to National Housing?” I asked. “For both of you?” he asked. “Yes,” I said. “100 bob,” he said, which means 100 shillings. “Let’s go,” I said, and all three of climbed onto the small motorcycle. Ten minutes later we were at my place. I paid the piki-piki driver the 100 shillings.

The locksmith went right to work. The first job was to get the door open. 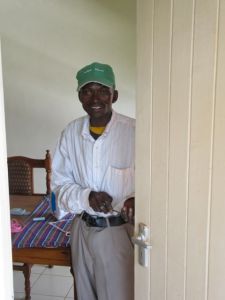 It took about 10 minutes but he did it! 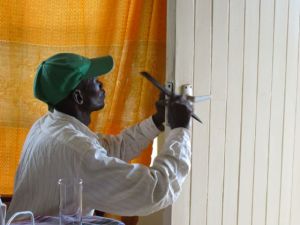 He took off the lock and disassembled it. 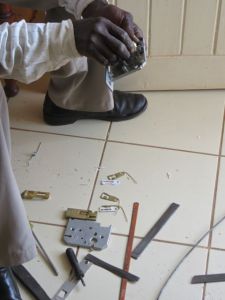 He then moved around the templates inside to create the new key pattern. 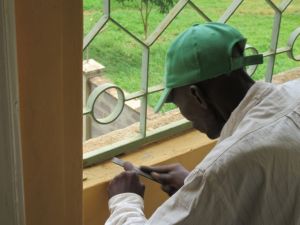 He filed the key by hand. 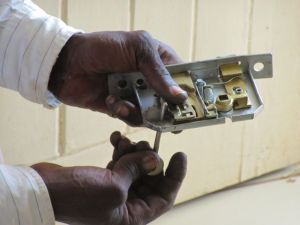 He tested the key, the put the whole thing back together. The whole process took about an hour. 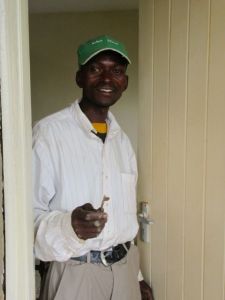 Success! I had access to my patio and a new key for the lock. I thanked him, “Asante!” I said. I gave him the 1200 shillings, with an extra 100 shillings to get back to the center of town. Piki-piki drivers wait just outside the housing complex to give rides to residents and anyone else passing by. It was a good day!