The fourth year optometry students ended their semester in July. Since then they have been visiting family and getting ready for their qualifying examinations. Optometry is not regulated and there are no state licensure examinations, so this is the closest thing to a comprehensive assessment of their skills that exists. Today I helped out Drs. Donkor and Okenwa-Vincent with the test. In the above photograph, Dr. Donkor is calling five students back for the exams.

Many of the students put on their best clothes for the qualifying exams.

There were five stations and each took about 12 minutes with a 3 minute change over. I was at the first station that was responsible for evaluating clinical history taking, case analysis, diagnosis, and treatment plan. I did a role play where I pretended to be a patient and had a specific diagnosis in mind. I answered their questions as if I were a patient. For example they might say, “Hello, I am practitioner Ubekwa. What brings you into our clinic today?” I would answer, “I am a “boda-boda” driver and am having trouble seeing in the distance at dusk and nighttime.” They would continue with the rest of the history. I would give them more clinical information such as distance and near visual acuities. In the end, they were to make their best assessment of diagnosis and treatment plan. 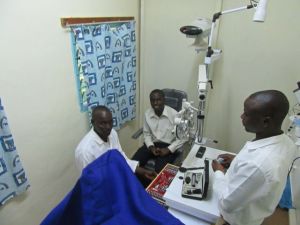 Other stations included confrontation tests and binocular vision assessment, retinoscopy and refraction, tonometry and slit lamp evaluation, and finally direct and indirect ophthalmoscopy. Today was one of the most comprehensive evaluations of 4th year students every attempted at the Masinde Muliro University Department of Optometry and Vision Science. We devised the plans, that is, Drs. Donkor, Okenwa-Vincent, and myself along with three Kenyan clinical faculty who graduated last year.

This is the faculty meeting where we designed the qualifying examinations. Dr. Donkor is taking the photograph. From left to right, Dr. Twelker, Nora, Abraham, Martin, and Dr. Okenwa-Vincent. Nora, Abraham, and Martin graduated a year ago and are part-time faculty from Kenya. I am still learning everyone’s name and haven’t learned their last names yet. They are the hope for the future. As an aside, the four year program is currently at the bachelor’s degree level, so they are not yet doctors. We’re working on it, though. As the program develops, it could rise to the doctor of optometry level, as in the US. Or, perhaps a better way to go for now is to have interested students obtain a master’s and then doctoral degree. The Kenyan educational system would readily accept that path. 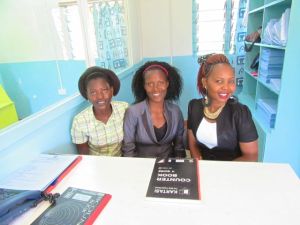 Some students were a bit nervous but most seemed to be having a great time. They had spent at least a week, often more, studying and practicing intensively in the pre-clinic. This evaluation, even though I had almost no input into their training over the last four years, was a very good first step in improving the quality of teaching in Kenya. All in all, I was impressed with their clinical skills and evaluation techniques.

The grading scale was a 0 to 20 point scale, so with the five stations, the top score could have been 100. My grades ranged from 14 to 20. I took it easy on them. There was no way, being brand new here, that I was going to be the determining grade that flunked a student after four years of study. I felt that Drs. Donkor or Okenwa-Vincent would be better suited to judge any borderline situations. I don’t think anyone failed, although one student was barred from even taking the examination because he stopped coming to class and clinic. He showed up but was asked to leave.

I spoke with several students, most from the Western Kenya region, and some had already lined up jobs in Nairobi and other places. Remember that our program, even though it is the highest quality in the country, is located a bit off the beaten path in Kakamega. Having said that, it is centrally located in relation to other African countries such as Tanzania and Uganda, who also speak English and Swahili. The hope is that we could become a hub for international students from other Eastern African countries. I thought it was funny when one Kenyan student, who had taken a job in Nairobi, asked me how it was to live there. “Well, I was only there for about five days, but it was busy, chaotic, exciting, and had a lot of opportunities,” I said. She was happy about my answer.