In preparation for climbing Mt. Kenya the main idea now was to rest, get over jet lag, and become accustomed to the high altitude. As I mentioned in the previous entry, I arrived in Nairobi Tuesday night and traveled to Nanyuki Wednesday. When we arrived to Kongoni Camp, a lodge recommended by Lucy Booth of Kenya Treks, I asked my guide John Karumba if we could take a stroll in the morning. I guess I am not very good at just sitting around.

Perhaps I should take a step back and explain why I chose to climb Mt. Kenya. I wanted to start my time in Africa with an adventure, but there were many adventures to be had here. The first idea I had was to climb the highest peak in Africa, Mt. Kilimanjaro, and some friends of mine did just that about six months ago. The issue was that Kilimanjaro is not in Kenya. Most people fly into Nairobi, Kenya, they then travel south to Tanzania around the mountain and start from there. Another factor is that everyone wants to climb the highest peak in Africa. As a result, it is quite expensive with budget packages in the $2,000 to $3,000 range, most likely with a large group of people, and that is not including air fare. From the research I did, it is easy to spend $3,000 to $6,000 on the trek.

Mt. Kenya, on the other hand, is the second highest peak in Africa and located about 150 miles north of Nairobi right in the heart of the country. Since I hope to move here and teach near Kisumu, I felt that a trek up Mt. Kenya was more my style. One added benefit is that it was much less expensive. Including full board at Kongoni Camp for three days and nights, a six day trek with guides and porters, park fees which help preserve the Mt. Kenya National Park, and transportation the cost was about $2,000, not including air fare. In addition to John, the lead guide, James an apprentice guide and several porters, I will be doing the trek with one other person, an American named David who I have not met yet and will arrive tomorrow. 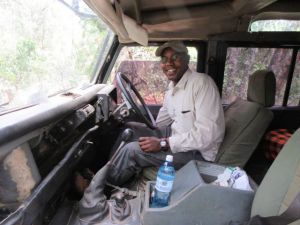 John arrived this morning at Kongoni Camp in his vintage diesel Land Rover, along with James. I asked where we were going and he said there was an interesting historic cave off in the bush about 6 miles south of Nanyuki. 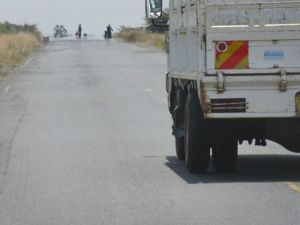 We headed south past a military check point. As I mentioned yesterday, there has been an ongoing security issue in the last years involving truck loads of migrants from Somalia, which borders Kenya in the north east. Many migrants have settled in a large slum in Nairobi called Little Mogadishu. The poverty and marginalization have created a fertile recruitment ground for Al-Shabaab, an organization that has claimed responsibility for several attacks in recent years. 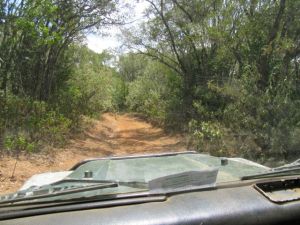 We turned east off the main road and heading into a forest on a deeply rutted dirt road. This area was wild but far from pristine. We saw sheep herders with about a hundred head of sheep, and cattle herders are often frequent the area. The old growth forest has been cut down, but the native Olive Oak and Cedar have grown back but are often concealed by dense underbrush, said John and James. It is close enough to Nanyuki that some people camp and farm in the region. It is a protected area, but not enforced, and not part of the Mt. Kenya National Forest.

John drove in a couple miles then parked the Land Rover. We then proceeded on foot. As we walked, John and James told me the significance of the Mau Mau Cave we were going to visit. In 1953 the Mau Mau fighters discovered the cave and used it as a hideout. They were fighting for freedom and independence from Britain who considered Kenya their colony. Later that year, the British Army discovered the hideout and attempted to bomb it. Their bomb missed the target but caused a partial collapse of the entrance. Kenya gained independence from Britain in December of 1963. 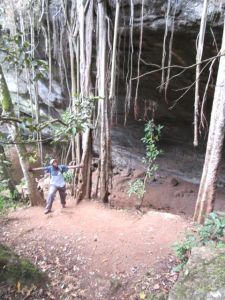 As we approached the area we heard children playing and laughing, but they disappeared as we neared. Here you can see James standing at the entrance of the cave. 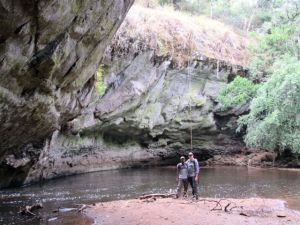 From another perspective you can James and I standing near the Nairobi River. 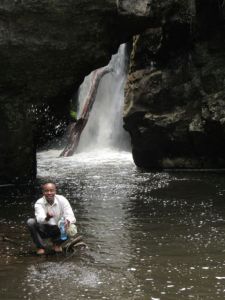 John enjoyed the water and you can see the waterfall behind him. 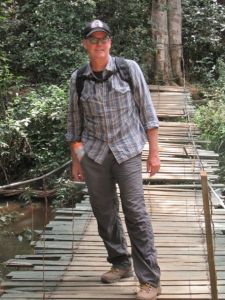 Sometime between 1953 and 1963 the British built a suspension bridge over the river. 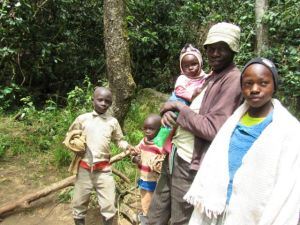 As we were leaving the children appeared from the forest to say “Jambo.” They were quite friendly and wondered why we had come to visit. John and James speculated that they lived above the cave with their parents who were sheep or cattle herders. After hanging out for a while we headed back to the vehicle. On the way back into Nanyuki, we stopped to snap this photo of the equator sign. 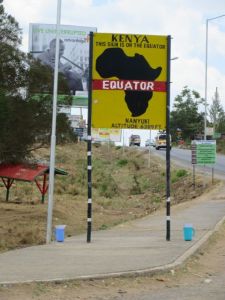